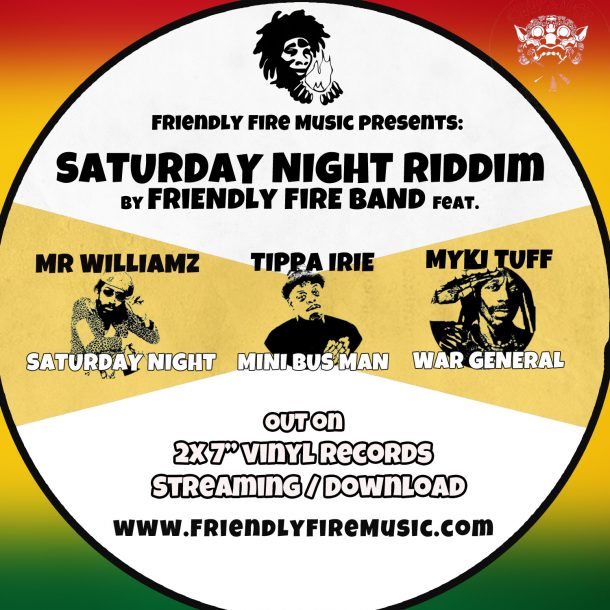 SATURDAY NIGHT RIDDIM out on Vinyl/Streaming

After a lot of faffing, we are proud to announce that the riddim project, which started with a demix ( the opposite of a remix) of Chopstick Dubplate and Mr. Williamz’s Saturday Night, is out on the 6th April on 2x 45rpm 7″vinyl records and on digital /streaming.

The Saturday Night Riddim project started as a de-mix ( the opposite of a remix) of Mr. Williamz and Chopstick Dubplates’ Jungle track “ Saturday Night”, which was re-played as a reggae track by Friendly Fire Band.

The riddim sounded so fat that Tippa Irie and Myki Tuff both recorded their own versions. Myki Tuff’s sound-killing anthem came out digitally at the end of last year and made a lot of noise, so we are now unleashing the other cuts on all streaming platforms and two Limited Edition seven inch records : Mr. Williamz’s party touch down, and Tippa Irie’s plea to reckless Mini Bus drivers in JA, together with a vinyl-only version of the riddim.

Don’t forget to check the sister release on Chopstick Duplates which features the original Mr. Williamz cut as well as a different set of vocals in a jungle style.

You can order a copy on vinyl or digital: SATURDAY NIGHT RIDDIM

2 years ago in FRONTPAGE, News
Newsletter

Great to catch up briefly with @pablogad_ for insp