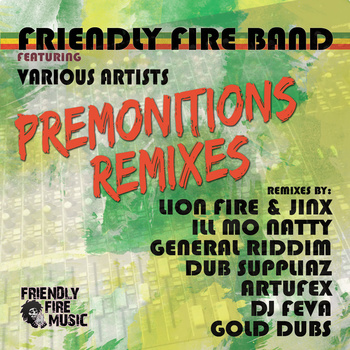 Just released on the 23rd May 2014, Friendly Fire Music has tracked down some proficient remixers bringing select cuts of the Premonitions Riddim  taking the traditional one drop tracks into the dance arena.

General Riddim (formerly Malicious DJ, Brotherhood of Filth) does his first remix for the label, an intense ragga beat with electronic sounds. Equally undefinable is Artufex’s trap-like remix of Raphael‘s Total Destruction , track which is also remixed by one half of Lion Fire , Gold Dubs, who brings it into a 140bpm style.

Artufex is also responsible from Friendly Fire Band’s frontman Tomlin Mystic‘s Buffalo Soldier  which preserves the spirit of this roots track in a dubstep style.

Scratcher extraordinaire DJ Feva takes Raphael‘s Total Destruction into a hip-hop based and dubby bassed mashup, with his signature turntablistic wizardry, integrating vocal samples from other tracks in the collection for a true Premonitions Mashup.

Ill Mo Natty also signs two remixes – Make Contacts, in a hard steppers style, and brings back the uplifting Message to the World  by the late Bingiman who leaves behind a message of hope.